“Patagonia is a tiny hamlet located in the Sonoita Valley in southeastern Arizona. A few blocks from the main street through town, on the edge of The Nature Conservancy’s Patagonia-Sonoita Creek Preserve, lies a nondescript ranch house that is no less than one of the most famous birdwatching sites in the world.” – Mathew Tekulsky, National Geographic News, 2004

A white stucco house of unassuming character, my parents’ house looks a lot like many others in Southeast Arizona. That the house is sandwiched between the beautiful Patagonia-Sonoita Creek and the woodlands of The Nature Conservancy, making for an unusually green backdrop in an otherwise barren landscape does make it special. And that it is located off Scenic Highway 82 in the idyllic hamlet called Patagonia, surrounded on all sides by mountains, only adds to its charm. Although these characteristics make it special, it is the yard that sets it apart from all other houses – the yard that became known as “Paton’s Birder Haven,” a “mecca” for birdwatchers and naturalists from all over the world.

“Though he had spoken softly, and though he had not intended to, the old man startled me. ‘Would you like to come in the yahd and see some hummingbairds?’ The voice spoke of New England roots and codfish docks and was strangely out of place in a cienaga (swampy bottomland) in southeastern Arizona. ‘Yes, sure, thanks,’ I stammered.”–Bird Watcher’s Digest, Arthur Morris

So began a 1992 article called “Hummingbird Hosts,” written by wildlife photographer, Artie Morris, for Bird Watcher’s Digest. When it arrived on my doorstep in Connecticut, I read it with pride, but was taken aback that my parents had been written up in a national publication. Feeding birds had been a lifelong passion for them, but why were they getting national attention for feeding birds? The attraction that day for Mr. Morris and for thousands who followed behind was the enigmatic Violet-crowned Hummingbird. A remarkable story started to unfold. Over the next decades, continuous feeding presented exciting bird sightings at the edge of the Patagonia-Sonoita Creek Preserve, among them the rare Violet-crowned Hummingbird and, on occasion, the Plain-capped Starthroat. Adjacent to The Nature Conservancy preserve, birders would line the fence along the Paton property with cameras and spotting scopes trying to get a glimpse of these jewels in flight. At this point, my parents decided to open their gate and welcome the public.

Birders relaxing under the canopy at Paton’s Birder Haven

So a canopy tent was erected and benches and birding guides were set out. They set up a chalkboard so daily sightings could be posted and installed a tin can on the gate called “the sugar fund,” for donations to help defray the cost. A guestbook followed and soon filled with the names of the thousands who visited each year, many numerous times. Where once there was a huge vegetable garden, they built a large water feature for the birds. Word spread quickly throughout the birding community and visitors started arriving from around the world. 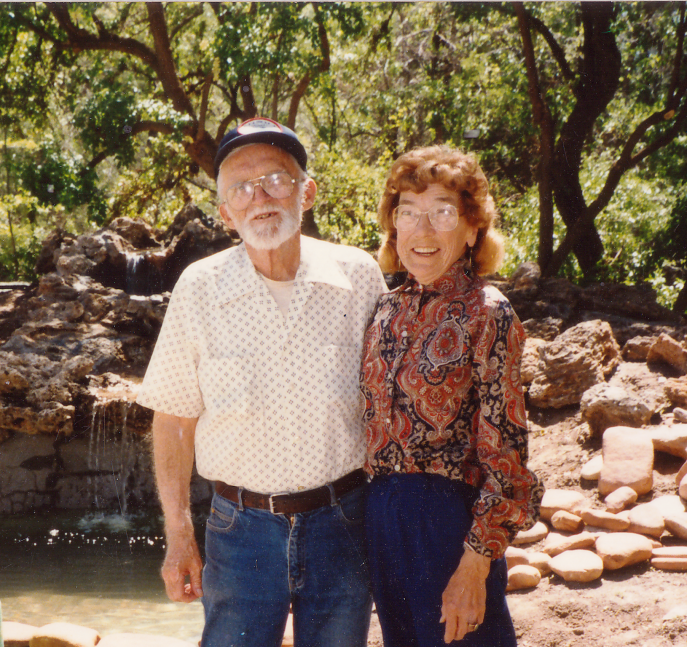 Wally and Marion celebrating the completion of the fountain  – 1996

But it wasn’t just the birds and birders who flocked to Paton’s, the media began arriving curious to hear the story of this generous and gracious couple who opened their yard to thousands asking nothing in return. Attracting media attention for decades, Paton’s Birder Haven has been the subject of numerous magazine articles including those in National Geographic, Smithsonian, Bird Watcher’s Digest, National Wildlife and more. In the first of two PBS specials filmed at the property, my parents tell the story of how it all began from the planting of flowers and bushes, to the visit from Artie Morris and the hundreds who lined their fence and finally their decision to open their gate and welcome in the world. Life around the Paton house was never quite the same.

“As we pave over the flowers, the commitment of citizen birders like Mrs. Paton, just like that of her husband before her, will become even more critical. There on Pennsylvania Avenue-the irony of the address was not lost on me — Marion Paton’s actions were so selfless as to be a manifestation of the good and seemed a fitting punctuation to the magic that was this corner of America. We’d come expecting rare birds, but we’d found rare people too.” – Luke Dempsey, A Supremely Bad Idea—Three Mad Birders and Their Quest to See It All.”