“It actually looks like we have relatives who were among the first settlers of Watertown, Massachusetts – which I didn’t know any of the three times I lived there!” – Kelly Paton Fitzgerald

Even before Boston became a town, there was Watertown.  In 1630, a group of emigrants from England landed here on the banks of the Charles River  and started a new life. One of those founding fathers, Edward Garfield (1583- 1672) was the 1st of my Garfield relatives to arrive in the “New World.” His name, along with 115 other men are inscribed on the Founding Father’s Monument. Each played a significant role in the early years in Watertown’s history.

Edward Garfield was born in Hillmorton, Warwickshire,  England in 1583 to parents Thomas and Agnes Garfield. He left for the new world in 1630 aboard The Arbella along with fellow passengers Governor Winthrop (1st Governor of the Massachusetts Bay Colony) and Sir Richard Saltonstall (image depicted on the statue). According to the Watertown records Edward held the position of selectman in the years 1638, 1655 and 1661 and was chosen as Constable in 1661. It was a time of struggle with Native Americans and neighboring communities.  “Conflict occurred over a wide variety of issues: land allocation, administrative accountability, religious orthodoxy and exclusivity, generational and gender differences, livestock and fencing, haves and have-nots.”- Divided We Stand, Watertown, Massachusetts 1630-1680, by Roger Thompson

When I received my niece’s email about finding Edward in Watertown, I googled the Watertown Founder’s Monument and came across some interesting sites. One called “Garfield Family History” contains historical information about all the many branches of the Garfield family, including Edward.

There is also a site called the “Garfield History Newsletter” which contains new information regarding any of the Garfield family trees. This month (October 2019) includes a review of the above mentioned book by Roger Thompson.

“The Garfield Connection: While this book does not give any real new or useful information directly on our Garfield heritage, it does give us a great insight into how our first two generations, Edward and his children, would have lived along side their neighbors. The few mentions of the family appear from Joan Buckminster Garfield (Edward’s third wife), Joseph Garfield and his wife Sarah Gale.  Definitely a must read for history and genealogy lovers.”

Another site allows membership into “The Garfield Society” – assuming you can prove that you are a direct descendant of Edward Garfield. An official certificate is then issued which shows the ship that carried Edward to America (The Arbella) in 1630 and the Garfield Family Crest.

Now we can also confirm that we are related to President James A. Garfield.

“Just another little tidbit for you family  history buffs.  I was finally able to trace the connection between us and President James A. Garfield!  He was my 4th cousin 3x removed.  His great, great, grandfather Thomas Garfield was brothers with my 5th (your 4th) great grandfather, Elisha Garfield.  Cool, right?  So their father (also Thomas Garfield) was both of our direct ancestors. I’ve got this line traced all the way back to England and to colonial America.” – Kelly Paton Fitzgerald 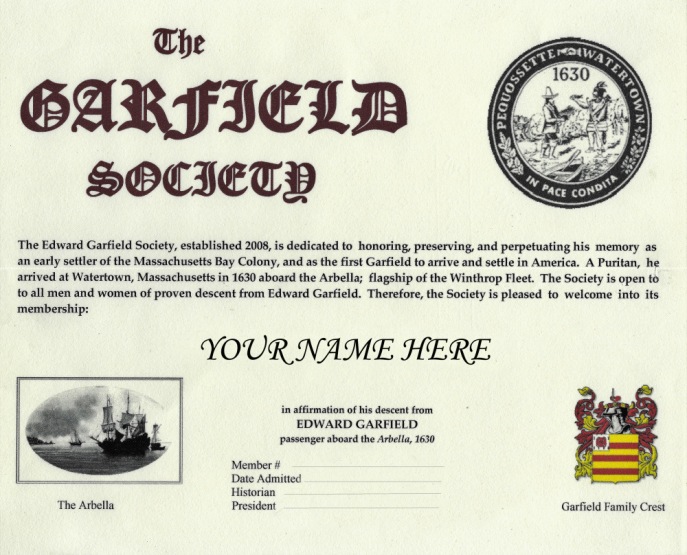 Certificate of Membership into the Edward Garfield Society