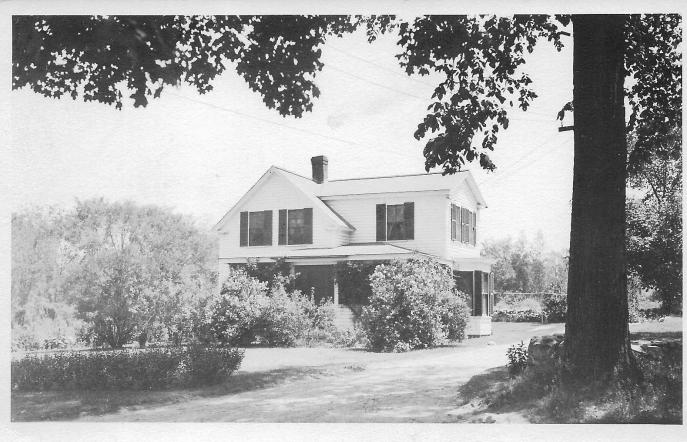 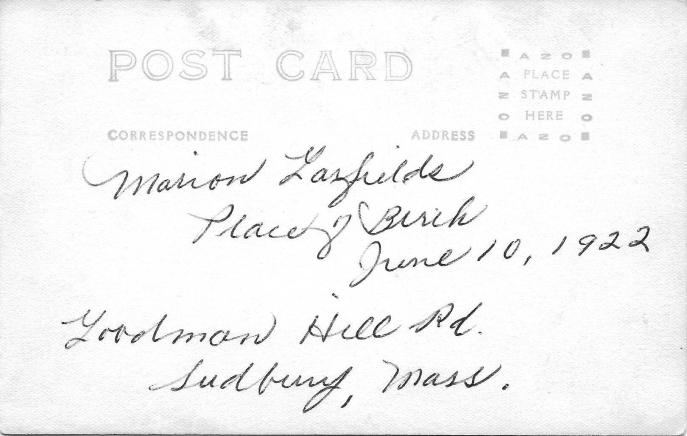 This postcard, depicting my mother’s childhood home, was most likely made sometime between 1915-1930. Three distinctive characteristics help determine its age – the divided back, the white border, and the real photo. In 1907, the United States Post Office issued Order #539 allowing postcards to have a separate space on the back  for both correspondence and the address. It became known as the “divided back period.” The white border on the front is indicative of the period between 1915 and 1930  known as the “white border period.” To save money on printing costs, manufacturers would leave a white border around the image. Throughout the “divided back” and “white border” period something called the “real photo” postcard became hugely popular. “Real Photo” postcards were first produced using the Kodak “postcard camera.” The camera used post card size film. Developed photos were then mounted on postcard backs.

Why a postcard with the image of my mother’s house was produced, I don’t know. Perhaps a local event like a parade or other celebration was the reason. Considering the popularity of  postcards during this period it could be that my grandparents, Sherrold and Jessie Garfield, had a photo postcard made for personal reasons. I found the postcard while going through my mother’s things after she had passed in 2009. By then the postcard was nearly 100 years old. The “Garfield House” as it is known today, has undergone many renovations throughout its long history. An excerpt from one of the house and barn tours of historic homes in Sudbury reads as follows:

“The original owner of this home, John W. Garfield, Sr.  [my great, great grandfather] ran the general store in the center of town with his son-in-law, William Parmenter in the late 1800’s.  Their store stood on the site of the current Veterans Park for many years, and the second floor served as a schoolhouse.  For a short time, the schoolmaster was James A. Garfield, a distant cousin to John, who later became President of the United States.  The store was sold in the 1920’s to Henry Ford, who moved the building to his property in Marlborough; it still stands today, as the Wayside Country Store on the Boston Post Road, not far from the Wayside Inn.”- Quote from Farm & Barn Tour, Sudbury Historical Society – 2005

Sherrold Garfield sold the house in the early 1950’s. My mother, Marion Garfield Paton and her family would be the last generation of Garfields to live there. During the last few years several of the new owners have contacted me to share their special memories of living in this historic and charming farmhouse. 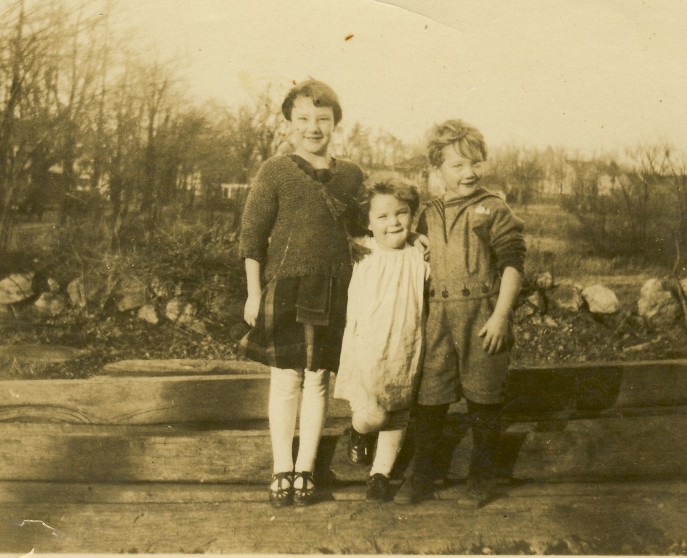 My mom (Marion Garfield Paton) in middle surrounded by Bess and Bill Garfield was the last generation of Garfields to live at 332 Goodman’s Hill Road, Sudbury, MA – circa 1925

“Thank you so much for these pictures! The one of our house with the “little house” in the front took my breath away. I’ve suspected that there was once a small house in front of ours, here first, and that it may be the one across the street, based on maps and old images I’ve seen. Proof! The photo itself is just amazing, with the horses and buggy, the ladies in their long dresses, the baby trees. Wish I still had that barn too. The photo shows a one-story room with a chimney on the right side of the big house. I wonder if that was the kitchen? Long gone and replaced by a two story addition, the chimney is also gone. Would love to know when all that happened.” – Leah Carey, former owner of the Garfield House – 2015

In this photo, my mother’s childhood home sits behind the little house that was moved across the street.  The barn and several other out buildings were also removed leaving just my mother’s birth home on the property.

“Thank you so much for sharing these photos… It is so fun to live in a house that has so much history! How incredible that your parents were married here! It really is a special house. I truly love everything about it. I would love to hear more history that you have on the house and your family. It’s known as the Garfield House.”– Cindy Geis, current owner of the Garfield House – 2019

Most recently, I received an email from someone who had rented the house decades ago. He shared some of his special memories:

“I lived at this house in the late 70’s and early 80’s. I loved living there. The half attic had some things that I assume were from the store [Garfield General Store] – ice cream maker and wooden barrels – never used.”

“The half attic was above the utility/laundry room behind the kitchen wall where the oven is. The barrels looked almost new, wooden with metal straps. The ice cream maker parts also looked unused, 1 tin container that would have gone into a bucket of ice, one metal crank with a wood handle and two metal tops for the tin containers. The tops were cast iron with a gear on each one that matched the gear on the crank handle. The tops had embossed patent numbers on them, one had the patent date of 1891, the other 1889.” – Dave Maroni, former renter of 332 Goodman’s Hill Road – November 2019

The “store” that Dave refers to is the Garfield General Store. The ice cream equipment would have been in that attic for almost 100 years by the time Dave discovered it.

The Wayside Country Store circa 1930  after Ford moved it to Marlborough as part of his plan to build an historic village around the Wayside Inn.

I contacted Cindy to see if she knew anything about a “half attic.” She didn’t, but immediately went on a search throughout the house to see if there might be a hidden space, that she had no knowledge of, where historic treasures might still be stored.  She did not find the half attic.

“I’m sure the things that were in the half attic have long gone as that’s where Bill Roys added a bedroom in probably ’82-83.”– Dave Maroni

I have not given up on finding those long lost treasures once stored away in the “half attic” at 332 Goodman’s Hill Road. I hope the person who found them knew of their significance and donated them to the Sudbury Historical Society or the Wayside Inn. Perhaps they ended up in an antique shop or  tossed away. But who knows maybe they are among the many treasures still housed at the Wayside Country Store.

“Garfield House” as it looks today